The Hotel W Barcelona, also popularly known as Hotel Vela, is part of the southern extension of the port of Barcelona. Designed by the Spanish architect Ricardo Bofill, this building is part of Starwood Hotels and Resorts Worldwide Inc. 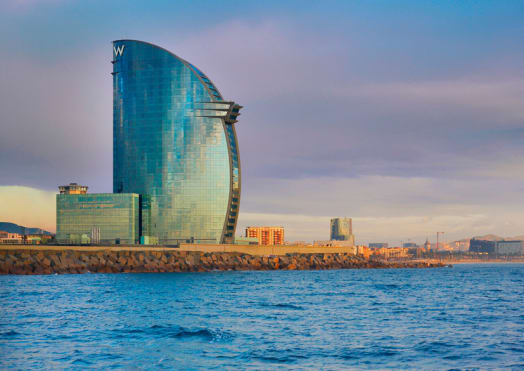 Collections included in the project

La Vaguada, the first shopping center to be built in Spain, is a pioneer in the incorporation of a new concept of public restroom with premium services. The result is a wellbeing event that combines contemporary design, technology and safety to change the way we experience shared restrooms.

Located in a historic building in Girona, the Casa Cacao boutique hotel combines the charm of the city’s historic center and the contemporary design of lodgings that join gastronomy, warmth and modernity under the signature of the Roca brothers.

The YE’S Marata aparthotel stands, contemporary and elegant, in the heart of the busy and vibrant Sotsialisticheskaya Street in Saint Petersburg, among the remains of the 19th century and the 20th century modern buildings. There are 1188 apartments of different categories on its ten floors, from 27 to 120 square meters.

Located in the western area of the Russian capital on the banks of the Setun River, the LIFE-Kutuzovsky residential compound brings together eight modern buildings around a sophisticated retail and leisure space.

Khabarovsk International Airport is the largest airport in the Far Eastern Federal District. In 2016, the old, unfunctioning terminal was demolished, and later on its site started the construction of a new terminal, which was finished at the end of 2019.

The Quinta do Alferes was built at the end of the 18th century, although the walled property as we know it today was built in the second half of the 19th century. The existing building was and continues to be a typical Mayan country house, in spite of the adaptations it has undergone.

The headquarters of the international educational project Learnlife bring a revolutionary learning concept to Barcelona, with creativity, co-creation and personal development as core ideas.

Both the architect Tagliabue and the interior designer Urquiola wished to replicate in the building the philosophy applied by the Modernist architect Domènech i Montaner in the historic Hospital de Sant Pau at the beginning of the 20th century: to base the design of indoor and outdoor spaces on the wellbeing of the sick.

The Portas do Sol building, located in Vila Nova de Famalicão, stands out as a high-level residential space, filled with high-quality materials.

The new Coca Cola headquarters in Argentina is not only a new working space, it also symbolizes a cultural transformation.

The remarkable restaurant project of the renowned Torres brothers has been devised as a temple for the senses and also as a hub of expertise.

The modernity of the Spun urinals and the charismatic geometrical shapes of the Loft faucets are the perfect fit for a restaurant that is a melting pot of cultures and tastes.

Sophistication and functionality are the essence when it comes to shaping the bathrooms of a 5-star hotel in such an exclusive environment as Abu Dhabi’s business area.

Knowing that each detail at the Hotel Sofia will provide a sensory experience, its bathroom spaces were equipped with pure double basins manufactured in the warm mineral texture of Surfex®, Roca’s Solid Surface. Customized with a practical towel rail, the basins were the perfect fit in a contemporary environment with a slight Mid Century Modern spirit.

The emblematic building of the 1929 International Exhibition provides inspiration to modern and neutral bathroom spaces, capable of combining functionality and elegance in the classic lines of the building and the essential solutions for a comprehensive and pleasant grooming experience.

The 270 apartments that make up Bucharest’s more exclusive residential project allowed Roca to devise different bathroom spaces that share the commitment to design and the care for the environment.

The Eiffel Tower, built by French engineer Gustave Eiffel for the 1889 Paris Universal Exposition, receives 7.1 million visitors a year, making it the world’s most visited admission-charging monument. Roca products were chosen to equip the bathrooms of the Eiffel Tower’s refurbishment project, led by the architectural studio Moatti et Rivière.

Designed by world renowned emerging architectural master Ma Yansong, the Sheraton Huzhou Hot Spring Resort Hotel is the only international luxury hotel in Huzhou, making it one of the most prestigious icons in the city.

Arena Pantanal is a multi-use stadium in Cuiabá, Brazil, especially built for the 2014 FIFA World Cup, when it will host four matches.

The Bolshoi Theatre first opened its doors on 20th October, 1856, during the coronation of Alexander II. Over the years it has been perceived as one of the main sights of Moscow.

The Hostal de La Gavina luxury hotel in S'Agaró, Girona. It is located on the mythical Catalan Costa Brava and combines discreet modernity and elegant design with the most highly refined classical, traditional atmosphere.

Almost 15,000 Roca's products, including faucets, washbasins and toilets, were installed in Beijing's Olympic buildings: a number of hotels, the Olympic Village, two stadiums and the Security Command Centre for the Olympics.

Exceptionally modern and color-changing, Roca conceived the spaces of the National Aquatics Center as a golden opportunity to leave its mark in the unique architecture of the Beijing 2008 Olympic Games.

ROCA uses its own and third-party cookies to optimize your experience and perform analytical tasks; by using this website, you consent to their use. You can obtain further information, or learn how to change the settings, in our cookies policy. More info